What a week it has been…and it is only Wednesday!  Baby teething is no joke, but Reid has been handling it like a champ.  We noticed a few weeks ago that the buds on his lower gums were trying to make their way to the surface and sure enough they made their debut the end of last week!

For months now, Drew and I have said “oh, he must be teething” whenever he gets fussy–but it wasn’t until now that it was true.  We scheduled family pictures for the middle of this month as we thought the fall leaves would be the prettiest (with this weather, the leaves still haven’t really started to change around here–but the pictures are going to turn out great regardless!).  I was determined to get a “gummy” smile of Reid as one of my biggest regrets was not getting newborn pictures taken.  But alas, the little white buds started emerging just days before photo day.  Luckily, they hadn’t broken the surface yet so I think we should get at least one “gummy” smile!! 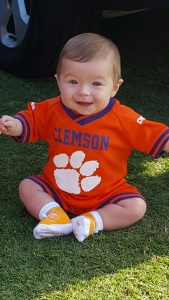 As I am brand new at this whole teething thing, I asked a lot of moms (and dads) how they survived teething and what tricks worked for them.  All and all, we all have the same desire to reduce pain for our children (and lets be honest, to make our lives a little more easy!).

Top things I learned about teething:

Gone forever is Reid’s sweet toothless smile but his two little nubs look pretty cute too! I am happy to report that we survived and that he is not in pain anymore.  I certainly am not looking forward to teething ahead, but now I will be better prepared thanks to some advice from other parents!